Note: This really is about weight loss and I'll even show much much I lost but I'm looking at this from a startup context.

I generally find people's second act in the startup world far, far more interesting than people's first act. By second act, of course, I am referring to when an entrepreneur tries to replicate the lightning in a bottle experience that they initially had when they built a startup. Second acts seem to almost always be less successful than people's first act. Here are some examples:

And that, dear reader, brings us to Kevin Rose and Zero. Zero is a new app for what is termed Intermittent Fasting (IF) which is a technique where you fast for a long stretch of the day on an ongoing basis. Here's what the app looks like:

I've now been using Zero since 1/7 so I have 20 days on it which I think is enough to make some comments. On 1/7 I weighed in at 194 which isn't an all time high for me but does reflect, well, post Christmas and Holiday weight gain. I certainly wasn't fat by any means but I felt larger than I wanted to be. After showing my wife Zero we made the joint decision to go on Zero. My wife suffers from Celiac disease in a fairly bad way and by the after Christmas period she was in pretty much constant stomach pain. Zero, at the time, seemed like a fairly rational decision.

Here's my weight metrics, unsophisticated as they are: 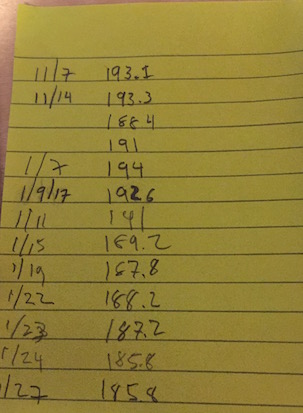 Note: This was originally written late last week which is why the day count is slightly different. I've lost about another pound since this was written but it wasn't worth updating the picture.

Since I started Zero I have lost almost 10 pounds which for a 49 year old man is, I think, fairly good. The only real goal I had at the start of this was a Gandalf like approach to buying new jeans. When I found out, post Christmas, that my jeans didn't fit all that well, I took the position:

Thou Shalt Not Buy Bigger Pants! (Gandalf to a group of fat hobbits)

I am happy to report that no new jeans have been purchased and their fit is much better.

I cannot say that all of this is tied to Zero. On 1/15 one of my wife's good friends, H, convinced her to go on Whole 30 and I came along for the chaos. Whole30 is one of those diets where you:

Given that I cook everything from scratch already this basically amounted to slight modifications to what I already cook. I've never drank so the alcohol restrictions amounted to "don't put wine in the beef stew made yesterday" and didn't affect me at all.

So while I can't say that all of this is due to Zero, I think the bulk of the weight loss is attributable to the Zero's Intermittent Fasting approach. By reducing the window of time during which you can eat down to say 7 to 8 hours, my wife and I have gone from two large meals (lunch and dinner) generally down to 1 (lunch) and a snack (dinner). So from a weight loss perspective, I suspect the reduction in overall food volume is a bigger contributor than the foods I've taken out of my diet.

Overall I've been fairly pleased with Whole 30 as a approach to food. My wife's constant stomach pains are gone so that's a huge win from my perspective. That was why I agreed to go on it and it has been a complete success in my opinion.

Unfortunately the Whole 30 cookbook isn't all that good. The recipes fall into that difficult, pretentious category of recipe where my comment would generally be "trying too hard". Additionally some of the recipes are flat out either bad or wrong (don't try to make mayonaise their way; go get Kenji's book) or follow the Pioneer Woman.

Comments on the Zero App

The Zero app is very much no nonsense – you get a calendar and a few different options for scheduling your fasts and that's it. And that's my biggest problem with it – there's no way to add your own data to the fast. I would have very much liked it if say you could attach a picture of each meal you ate to each day. Or if you could put in a weight metric. Or if you could put in how you felt. I'd love to know how many days of Zero it took for my wife to feel better but I have no idea.

Still Zero led to me losing 10 pounds and that's nothing to disregard.

You do get some summary metrics – I can see my average fast time was 16h 49m and that on average I ate for only 6 minutes during the night (I was using the Circadian approach to fasting).

Zero can be gotten from the App Store.

My recommendation would be to just get the baseline book and then ignore their whole philosophy and just focus on the food aspect of it. Diets, these days, generally seem to be as much guru advice as they are diet and, honestly, I doubt you need a guru. I know I don't.

Zero is ridiculously simple to use does make it easy to stick with a fast. Pairing Zero with Whole30 did seem to produce, at least for me, overall weight loss and, I think, some health gains. Recommended.