PayPal is one of those companies that we all love to hate. They work with money so we all feel about PayPal the way we sort of naturally feel about banks – mildly distrustful. Also the tales of PayPal woes are legendary. And then there are the login / password issues that seem to surround PayPal like a cloud of flies. All of that has always made me think that PayPal got to where it is now by luck but I'm really starting to reconsider that. In fact my current thinking is that we should all realize that PayPal is smart. And when I say smart, I am starting to think that PayPal is Amazon Smart.

In order to explain this I have to disclose a personal preference of mine – if I have a choice as to a software engineer's nationality, I always tend to lean British. I've had remarkable success over the years in hiring British software engineers and, more than any other nationalities, the results have skewed dramatically positive. I'm not sure whether it is the educational system, the way they refer to computers as 'kit', extensive reading of Dick Pountain when I was young causing me bias, the fact that all the engineers my age learned on either a Sinclair or a BBC Micro (systems so limited that they forced you to be good to survive) or something else but something about the U.K. seems to produce great software engineers.

And because I tend to lean British in my software engineer hiring, I tend to favor British Linux magazines. Even though I live in the U.S. and the subscriptions are frightfully expensive, I still get print subscriptions to Linux Format and Linux User. These magazines are fantastic – they remind me of Byte Magazine back in its early 1980s hey day when every issue taught you something new.

Earlier this morning I had to set up a new subscription to Linux User and when my credit card failed due to some U.S. / U.K. thing, I opted to use PayPal instead and I got this: 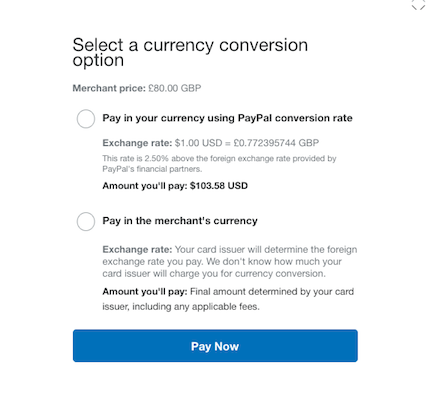 Note: This was new to me but perhaps PayPal has been doing it for years and I just never knew. For some reason, however, this felt to me to be a new feature.

What PayPal is doing here is recognizing that non local currency transactions are a combination of hard and scary for people. Most of us, at least Americans for certain, never really have a clue about a foreign currency transaction except we sometimes know "Ok a Euro or a pound is roughly about a dollar". And when prices are in something truly foreign like Yen, well, don't even ask us. What PayPal is brilliantly doing here is recognizing this and saying to the user:

I know this is hard for you so here's the actual transaction value and I'm going to actually charge you for the privilege of my doing a teeny, tiny bit of math (and taking some risk).

The fact that I can look at 80 pounds and be told that it is $103.58 gives me much more confidence in the transaction. Even though I can read the screen and know that I'm being charged (quite a bit actually) for just knowing this, well, it certainly made me feel good. And, yes, I took them up on it. PayPal has seriously removed an impediment to commerce here.

You should note that if you're not American, I suspect you're thinking something like "Dude – it is just an exchange rate, deal with it!". And that is certainly true but Americans don't have to deal with exchange rates anywhere near as often as non-Americans. America's geography is so vast that you can spend decades here without leaving America whereas most Europeans that I know think nothing of crossing national borders even over a weekend.

The lesson here for startups is that you can always make money by making hard or scary things easier for people. The simple fact that right after buying this I have to file an expense for it means that I don't want to wait for a credit card statement. By paying PayPal that additional 2.5%, I know exactly what I spent and I can file my expense report immediately.

Once again I'm going to repeat it: PayPal is smart.