Eric Howard, a good friend of mine, is the founder of Outreach Indiana, and he is not a part of the high tech world and he is no one that anyone in high tech has likely ever heard of. But learnings can come from anywhere and Eric taught me a powerful one.

I spent a big chunk of my yesterday assembling a chandelier: 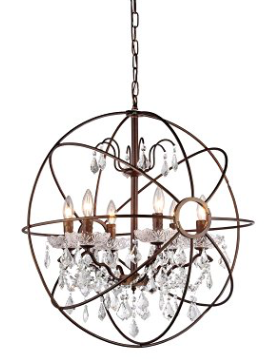 Here it is on Amazon and while it looks amazing, the reviews are consistent: "Looks great; instructions suck bad; hard to assemble."

So you start unpacking this chandelier and you end up with what seems to be 1,000 different pieces strewn over your workspace and two sheets of illegible, incorrect, crap ass instructions that make you want to drink heavily. And I was reminded of Eric Howard.

Eric is a professional non-profit worker and he's the founder of a local Indiana charity that helps homeless youth. In 1996, Eric felt compelled to do something about the homeless problem in Indianapolis. And, not knowing what exactly to do, he got into his car with bread, peanut butter and a few other supplies and he drove around Indianapolis. As he found people who were homeless, he fed them and he helped them. Down the road he found other people to work with and ultimately ended up founding Outreach Indiana which is a very real charity that does fantastic work in our community.

So here's what Eric taught me:

In anything you're doing, it is always easy to get paralyzed by the scale of the problem. Whether its assembling a chandelier, learning a new language or even tackling homelessness, just starting is the most important thing. There's even a term for this, Analysis Paralysis.

As far as that chandelier goes? Once I thought about Eric and just start, I grabbed the only two pieces that I could see had a logical connection and put them together. Then the next three and so on. Four hours later it was hanging in my dining room and my wife was delighted.

Note: My wife helped put it together too; the writings above makes it sound like she wasn't involved at all and that's just not true.