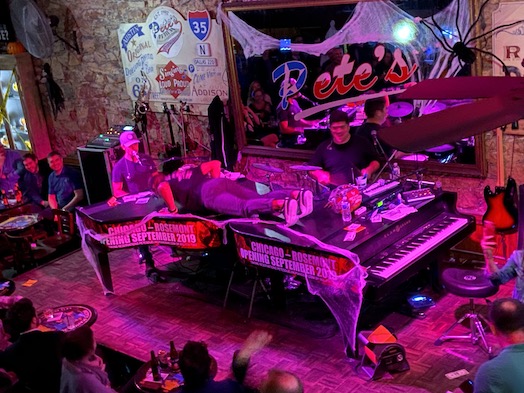 Because side projects are as ridiculous as someone doing push ups on top of a set of dueling pianos; Picture taken at Pete's Dueling Piano Bar, Austin, TX; Recommended

Great Googly Moogly! My current side project is almost 10K lines of code in total or at least 5k lines (and yes there are tests, rspec, I don't know why it says 0 lines of tests):

That's big for a side project and it is particularly big for something that hasn't actually launched yet. When I was building this, I made a deliberate decision about how I approached this side project which dramatically increased my productivity.

My decision, right from day 1, was to Invert. Normally we think of a side project as something you do after work so what I did was to do my side project as my first thing every day I worked on it.

Here's my thinking on this:

What I have found is that if you wait until after the day is done, you are just plain tired. Often you have all the best intentions of working on something but you simply don't get to it because, well, life.

Now when you do it first thing, I don't mean that I'm putting in 8 hours on my side project and then a day of work. Sometimes I might put in 15 minutes. Sometimes an hour. Rarely has it been more than that.