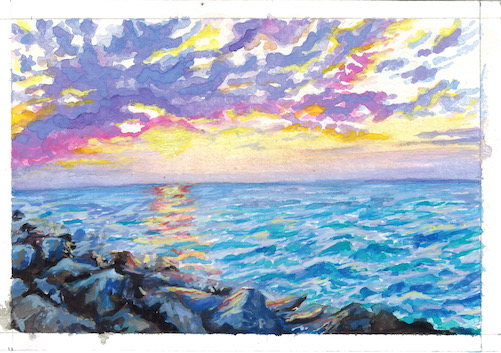 Artwork by my friend Autumn Mott; Hopefully I can find a better link to put here

It is a Monday and what better way to start your 6 am Monday morning then learning some of the elements of a new language – Rust.

I started by adding a link in my Browser toolbar to the Rust Playground which amounts to a web based REPL (Read Evaluate Print Loop) for Rust where you can type in Rust code and run it. Yes I know it really isn't a REPL because Rust is a compiled language not an interpreted one but it functions well enough as a REPL that I can wrap my Ruby tinged mind around it.

The output of this is:

I wanted to make a simple change to experiment with the use of variables so I added a main2() function and called it from main():

The output of this is:

You can see that the let keyword assigns a variable and that {} binds a variable into a string (which is generally called interpolation).

Note: Variables quickly bring you in to the heart of Rust – immutability – and here there by dragons that hopefully come up tomorrow after some reading.

Here's a permanent link to this if you want to try it out.

Another way to have a web based REPL for Rust is Repl.it. And while I like the concept of repl.it, they have eliminated any privacy without a paid account: Upgrade your account for private repls. This appears on the bottom of every new REPL you create and at $74 / 12 months that feels expensive simply for the basics of privacy.