I've been actively working on a side project for the past several months and one of the people who has been helping out a bit around the edges wants to learn how to program Ruby on Rails. Since this, like everything I always do, is a distributed, remote effort, an in person teaching effort just doesn't work.

When they pushed back on the feature set I was making and said that it wouldn't work for them, I said "Well that's fine, tell me what you want". And they responded with a detailed set of Agile User Stories. I took a look at these and I realized that if I mapped them into Github issues (aka tickets) and then Github Pull Requests that this might be exactly the right tool to get this person past the learning hump.

Note: Just to be clear, it doesn't matter what the side project is. Yes it is live on the Internet but it is buggy as hell. And this is a major new feature. The whole point of this blog post is to talk about a new learning technique not "Scott's (current) Crazy Side Project".

The hard part with learning any new development framework is making the leap from "here's what I want" (the story) to "here's what to do to make that" (the code and tooling steps). Now if you use Github how we do, with a simple branch based development model, where 1 issue maps to 1 branch, this means that you can actually look at a user story and then see all the changes.

This is a weird enough learning concept that I'm going to illustrate this step by step.

Beginning With the Story

As a user, I want a currency system (ChangeCoins - CC) that is awarded to me for doing stuff.

From a Rails perspective, what this means, is that we need a data model, persistently stored to the database that tracks something else.

Continuing to the Issue

Let's look at the issue in question: 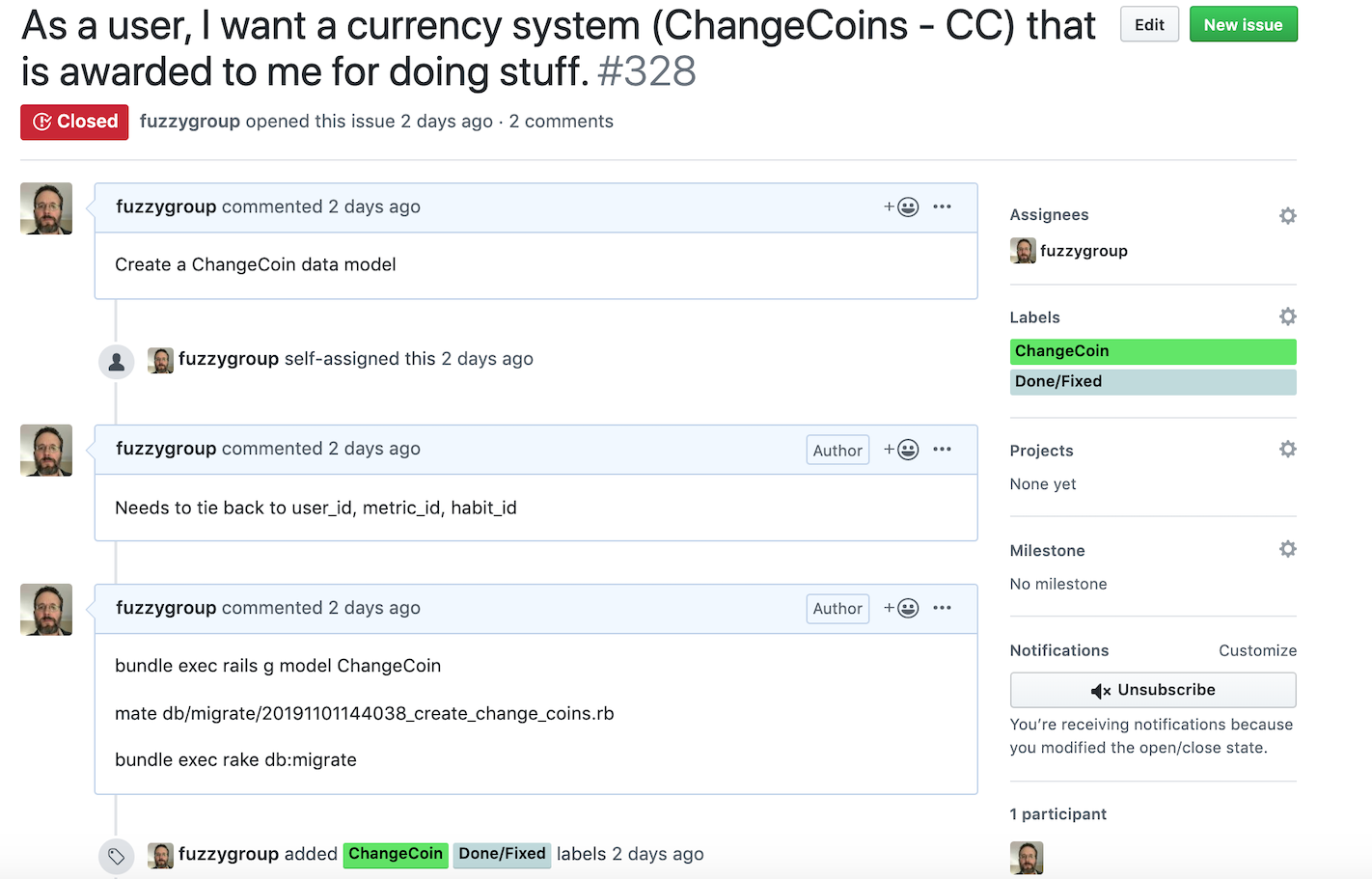 There are a few notes on the issue here:

A big reason for the notes on the issue is that if I don't put notes into the issue, how would you know that there are commands like:

These commands don't exist in the pull request so they have to be manually documented.

Note: If you're going to use this approach then I strongly, strongly advise you to add a label to your issues so that all issues can be logically grouped together. Even though you think "Oh I'll just work on this one thing", something else will come up (I got 2 issues into Change Coins and then found 4 other bugs, each of which was its own issue).

Now we need to turn to the Github branch and the pull request. A pull request is a set of changes that, for this project, represent what happened in the branch.

Let's start with the changed files in this branch:

This shows that 4 files changed. Now of these four files, one was automatically generated by the system (schema.rb) and isn't ever touched by the user and the other (reward_spec.rb) is just a skeleton file at this point so neither of these files will be shown.

This is a Rails model file. The source code comments beginning with pound symbols organize the model and illustrate where required things should be placed. This isn't a Rails convention, this is a "Scott" convention as I find it helps me avoid making mistakes. 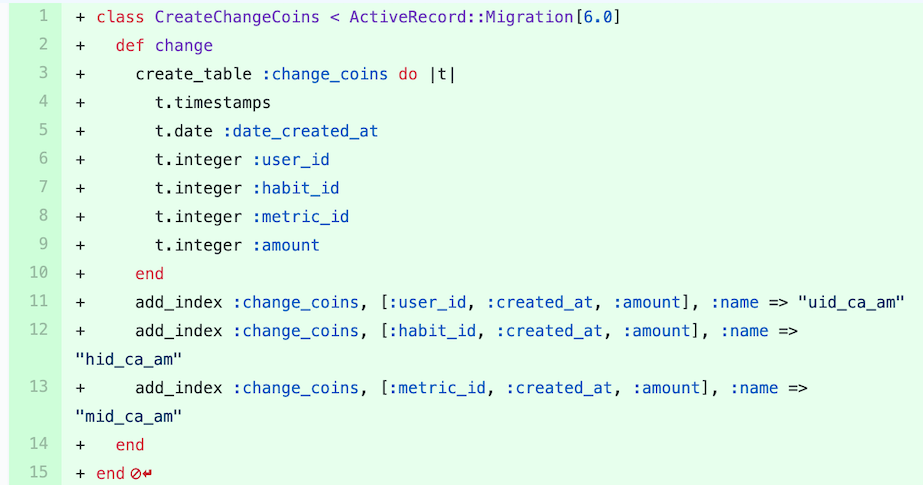 This is a Rails migration file. It lays out the data model for the entire table that stores the rewards for the user.

This isn't a perfect approach to learning, specifically:

Even with these problems, I think there might be something interesting here. I'll keep you posted if any real learning occurs from this.