So my buddy Nick almost rage purchased a Mac the other day and I thought that given that I sit at an 8 foot long custom built computing desk with six different MacBook computers on it, and a nerd closet of doom with 3 on the shelf and 2 more upstairs for the family's use, perhaps I should write down for him the different issues with respect to buying a developer machine in Fall 2016. As I write this:

So I'm clearly deeply divided but perhaps writing all this down will help either myself or at least someone else sort it out.

As I write this Apple has the following offerings each of which is a possibility for a developer:

Each of these is discussed below. Just as an overview, my buddy Nick isn't part of the "Apple Faithful" at present. He doesn't bleed six colors as we used to say (I date back to the Apple II days and my first Mac was a Plus) which means there are all aspects of the ecosystem which he doesn't yet get. Nick is a Windows user, a Docker Captain, a Udemy instructor and an all around good guy. His almost rage buy was inspired by frustration with Microsoft and its not dissimilar to my rage moving to Ubuntu-Mate.

The first thing to understand if you're going to enter the Apple ecosystem is are you doing it as a developer or as a tourist. If you just want a Mac for light consumption, for syncing an iPhone or for just answering the question - "is this for me" then you could easily buy either of these:

The new MacBook 2016 is the one I just bought my wife as she decided to goto graduate school this past October for her master's degree. It is:

Personally I despite the new Apple low travel keyboard but in time I could likely move from despise to gentle loathing. Given that I still use ThinkPad keyboards with trackpoints for my "desktop" Mac usage, that's actually a fair compliment. The new MacBook 2016 is limited to 8 gigs of RAM which I don't feel is acceptable for a developer but if your needs aren't serious then that is likely ok.

I'm tying this out on a MacBook Air 13" Early 2014 model which has been an absolute workhorse beast of a computer for me. Even though it only has 8 gigs of RAM, I've done more with this MacBook I think than any other and it has been a rock star for me. If Apple had just offered an upgrade of this exact machine with 16 gigs of RAM, I'd have bought it in a heart beat – I love it just that much. When my 15" MacBook Pro decided that it was useless, and only redeemable by installing Elementary OS, this was the box that saved my professional life. It runs I can't tell you how many different code bases and the only drawback is really the amount of RAM. It also has the advantage of a fantastic keyboard and an ok battery. The CPU kind of sucks and the fan makes a bunch of noise but I do love this damn little box.

Sidebar: Understanding What Mac You Have / Upgrade Tools

One of the first weird things about Apple hardware to understand is that Apple has relatively few model names and they just keep reusing them with internal, non visual suffixes like Mid 2013 / Early 2015, etc. What you have to do is this: 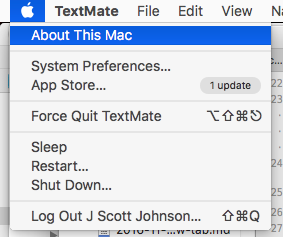 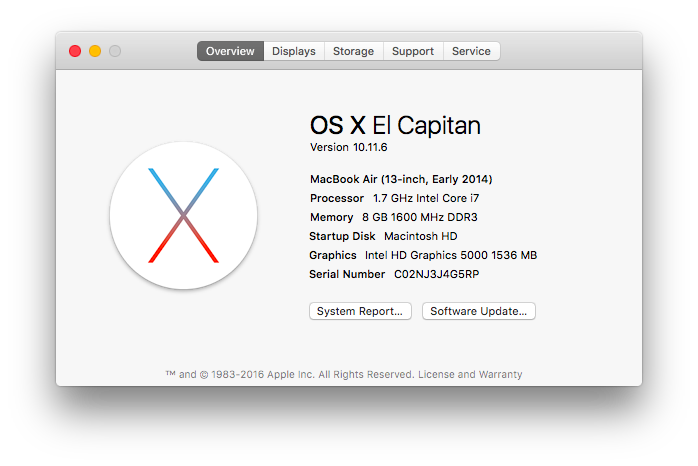 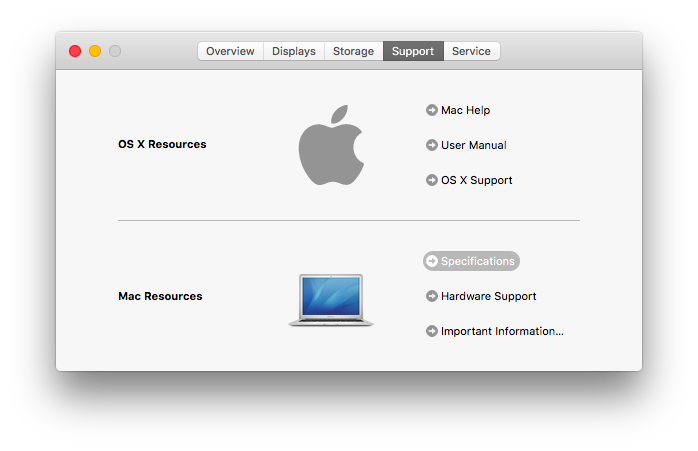 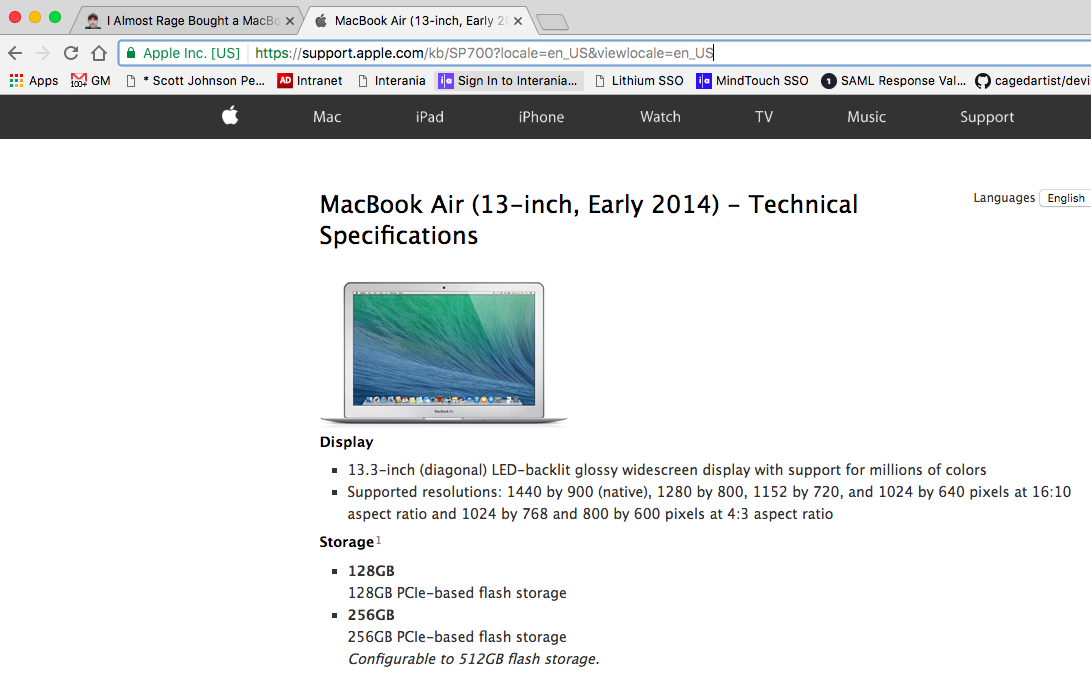 This will take you to a web page like this which explains exactly what your Mac is. The name at the top like MacBook Air (13-inch, Early 2014) is what you can give to Crucial if you're looking to upgrade something. Yes Crucial is still vital if you're using a Mac. Another great resource is iFixit.com if you're looking to understand exactly how to install the upgrade from Crucial you just bought. And yes there are special tools involved – just do whatever iFixit tells you to do and its usuallk ok.

NOTE: RAM on MacBooks is soldered in. If you don't get it at purchase time you aren't upgrading. Crucial's upgrades on RAM or Macs are either for older models or for Desktop Macs (the iMac line).

So You Want to Develop on a Mac

If you're serious about dipping into the Apple waters then here are your options in Fall 2016:

Each of these has distinct pros and cons. They all have pros but I think the cons are more illuminating so let's elaborate on them:

As I look at this list I have to wonder if my decision to try working on an Intel NUC using Ubuntu-Mate was entirely rational. An iMac would have gotten me the more than 16 gigs of RAM which I personally felt was necessary and that would have addressed my immediate needs. Now, that said, I'm a professional developer and, recently, it feels that Apple's path and mine are diverging, specifically:

I'm not the only one who feels this way:

Now there's some level of whining here – and I'm clearly among them – because I did just hand Apple almost $3,000 of my hard earned personal money for a new MacBook but there is one thing that I haven't mentioned about Apple Hardware and it is one of the two close out topics.

When you separate out RAM, price and performance, one thing stands out about Apple hardware – when it matches what you need – the pure hardware is fantastic. Specifically:

So Should Nick Buy a Mac?

So I started this with the tale of my buddy Nick almost buying a MacBook Pro. That wasn't a metaphor for what should I do – Nick is a real person who is telling his own tale here. My recent choice was clear – buy the top end of the previous generation. This got me the RAM upgrade I wanted, the keyboard I adore and it freed me from Dongle, Dongle, Dongle Hell. Apple's choice of USB-C everywhere is bold but it isn't for me. I do too many public facing events to NOT have an HDMI port on my primary travel machine. And the incremental hardware advance isn't sufficient in my opinion to justify the cost in Fall 2016. If Apple had been able to give me more than 16 gigs of RAM then I could have dealt with likely everything else but more than 16 gigs was my key issue.

I don't know if Nick should buy a Mac. For a professional developer buying into a platform is a major decision. The amount of learning that you have to do if you're serious is immense and the cost of the machine, unfortunately, is a rounding error when compared to the value of your time. I remember how hard it was to transition from Windows to OSX back in 2006 in my post Feedster days and it was expensive in terms of time. Personally I find it hard to think of Apple as a professional developer ecosystem in Fall 2016. It feels like Apple is trying to become a mobile computing company and developers are just a wart on that. I remember discussing this with colleagues as early as 2012 / 2013 and it does seem to be coming to pass. Honestly it feels to me that committing to a Linux platform makes more sense for Nick but that's just me. His opinion likely varies as it should. Personally I'm pissed as hell that the platform I've given more than a decade too seems to be petering out and that makes me more than a bit irrational on the matter.