I love you dearly – you know that. I've been running a Mac since the Mac Plus days and while my attentions have strayed from time to time, in my house there are more boxes running some kind of Apple OS than any other. And while I'd love to see a better phone, longer battery life, etc, there's just one thing I really want:

It is 5:30 am as I write this and I've been sitting at my wife's computer for the past hour trying to get her iPhone to sync properly so that if she can buy a new phone there will be no data loss. This is exactly how I spent the day of:

So, while I'm used to this, it doesn't make it suck any less. It is also how I spent yesterday morning when all my attempts to sync her phone came to naught. And while you know these, why, oh dear lord, why does synching an iPhone in 2016 suck so much more than synching my PalmPilot III in 1998? 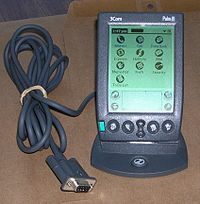 Here's how things use to work back in the day:

And while I remember an occasional conflict, mostly due to editing contact info on desktop and palm pilot concurrently, it wasn't the unending suck fest that iPhone synch has become.

Here, for example, was yesterday:

The last one, running out of space, is particularly egregious – you know how big the damn device is, its size. If there isn't a multiple of that size in free disc space then simply don't start the synch! Don't let it fail part of the way through!

Mobile devices are no longer a new concept. Synch should be painless. It should be plug in a cable, leave the device alone and its done. Instead synching an iPhone is always connect and pray. And while I have nothing against prayer, it shouldn't be a requirement to use a mobile device. Honestly, after yesterday and today, I sort of feel that this should be my new iPhone synch process:

So while I'd love to see a waterproof iPhone or wireless charging or something else, I'd settle for the product that I paid good money for just working a little better.