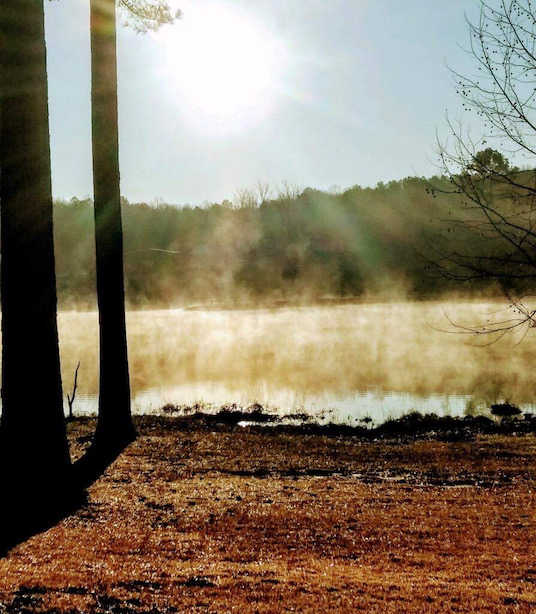 I am in the position of building a data pipeline that looks like this:

In this blog post I will walk through creating the Kafka server and then show you the initial configuration to get Ruby to talk to it.

Here are the core assumptions:

The baseline pricing for an AWS kafka.m5.large cluster is: 0.21 / hour without factoring in storage. 0.21 / hour means nothing to me so here's the calculation:

Whether or not this is a good deal depends on your budget and application but what I can tell you is that the AWS Managed Kafka is phenomenally easy to setup and get started with.

Note: Read thru the creation process below because I suspect it has pricing implications.

The new Managed Kafka service from AWS makes creating a Kafka instance absolutely trivial. You do need to know the VPC id of your instance to make things easier. You want to start here to create a Kafka cluster. Here are screenshots of the entire creation flow along with notes on anything I thought relevant. 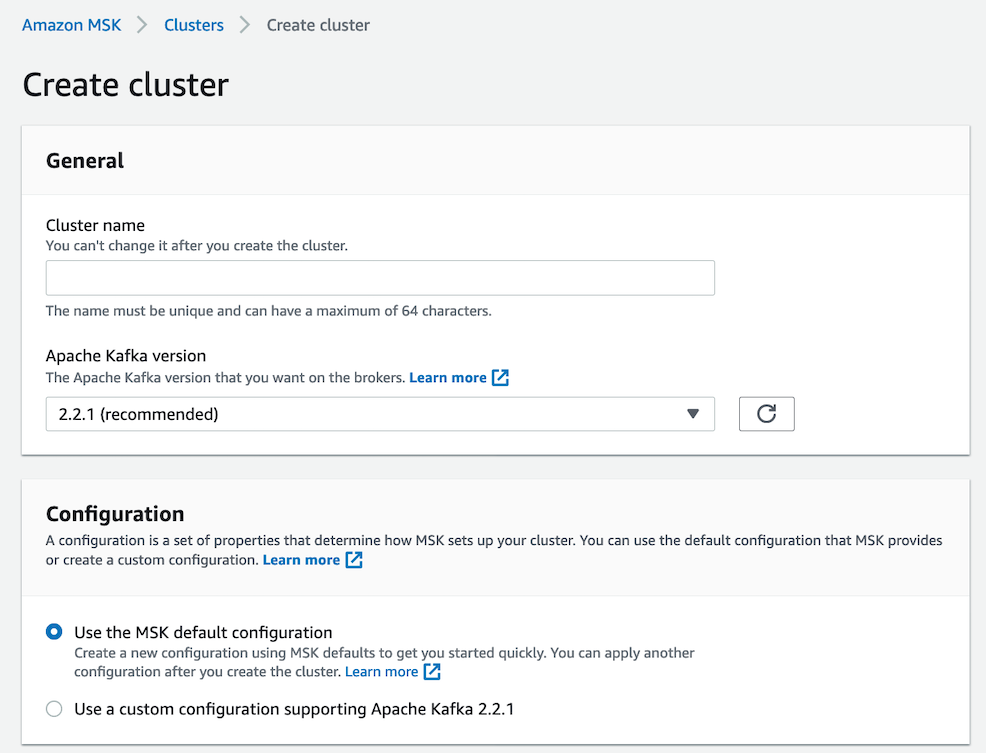 Naming your Kafka cluster is pretty simple and unless you are an expert I'd go with the standard configuration. AWS sometimes lags behind on their versions of open source stuff so keep that in mind.

The standard configuration options are generally pretty good. I might argue that auto.create.topics.enable should be enabled by default but that's a debatable point and really one tied to application needs. 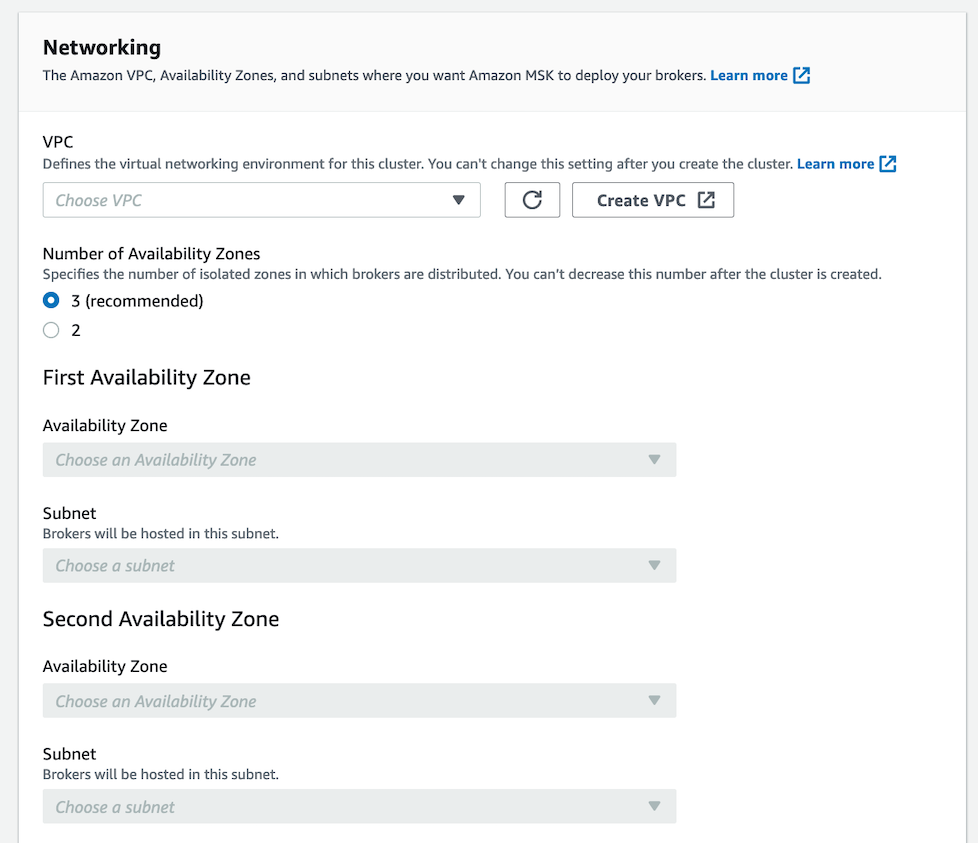 The networking options are where you likely will get into trouble. You want to: 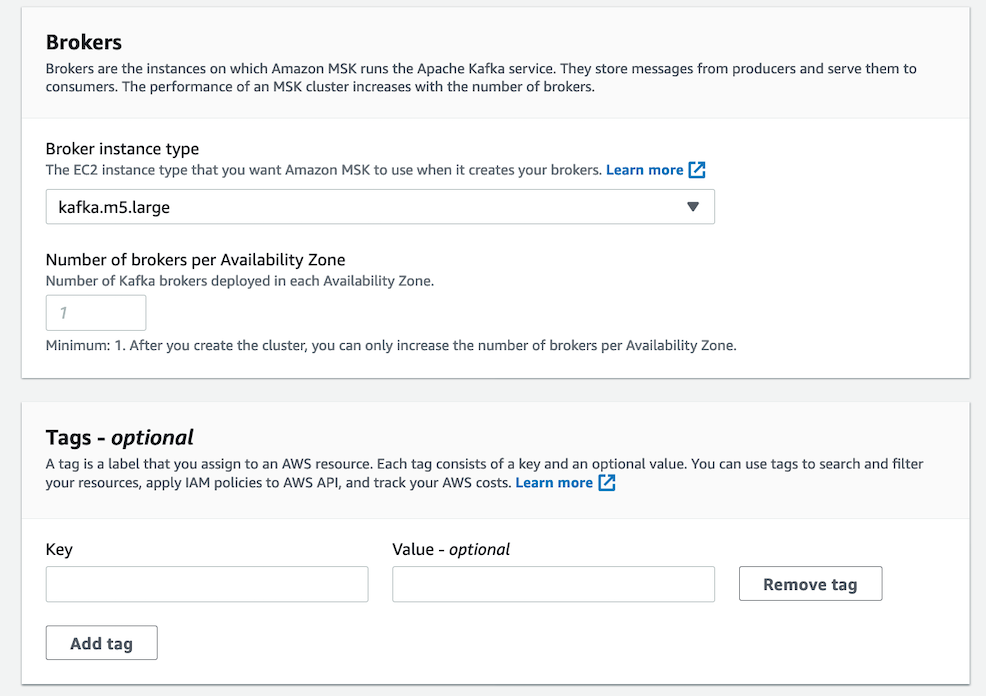 Unless you are experienced at Kafka and can estimate your needs, I'd recommend setting the broker size to the minimum. You automatically end up with a broker in each availability zone:

Your cluster will have 2 total brokers, distributed evenly across your 2 Availability Zones.

Given that the broker is described as "kafka.m5.large" which is also the item in the pricing page, it occurs to me that perhaps my pricing above needs to be doubled (if 2 availability zones) or tripled (if 3 availability zones). This is unclear to me and I'm not sure if I'll know until I see a bill.

I added a Name tag matching the name of the project and a Type tag of 'kafka' to better help understand the bill.

The default storage is 1000 gb (so 1 terabyte). I have no idea if this is enough storage or too little but you can't decrease it so I left it at the default.

EBS storage volume per broker. You can't decrease the storage after the cluster is created.

My guess is that whatever the storage bill is, it is either doubled or tripled based on the number of availability zones. 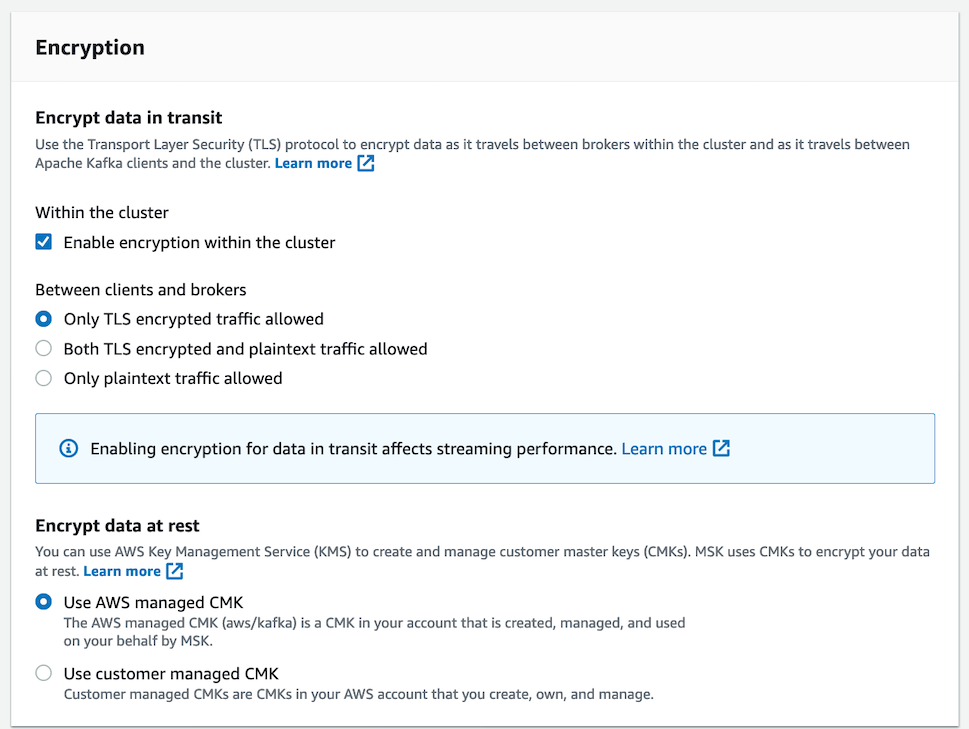 For this application which isn't particularly secure (it is based on public data from the Internet), I turned off most of the encryption options. 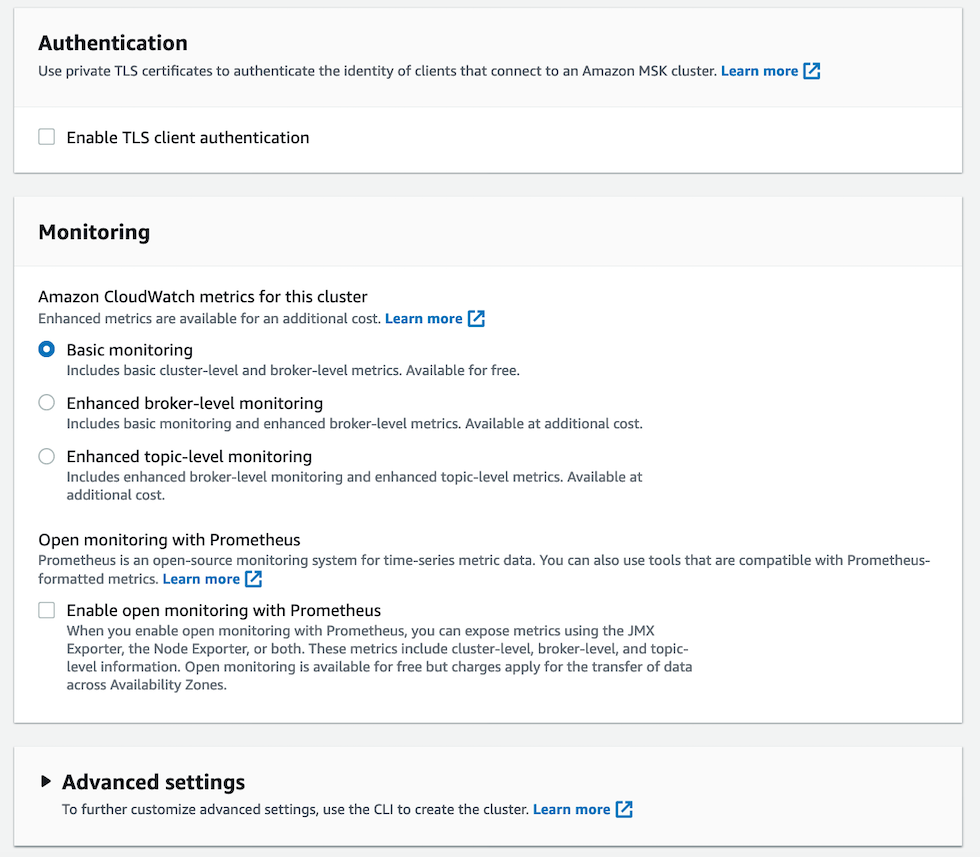 I turned on most of the monitoring options down to the Topic level. I also setup the Grafana option so that I can monitor down to the CPU / Disk level.

Just click the Create Cluster button and wait for a bit for your cluster to be created.

Once Your Cluster Is Created

Once creation is complete the you want to click the View Client Information button at the top of the Details tab and you'll get something like this:

Note: These aren't my actual kafka details but, even if they were, it wouldn't matter because unless you are part of my AWS security group (or I open it to the world) then you can't get access.

Getting Your Security Groups Right

I made things a lot easier by using the same security groups for my instance that is going to write to kafka and my kafka cluster. But, what I found, is that I would get connection errors like these:

whenever I tried to do anything with my kafka cluster. What I found was an answer at the security group layer here. I have not seen this referenced anywhere else and here is my write up on what to do:

And that magically made connectivity to my Kafka cluster work. Sigh.

Here are three basic ways you can test connectivity to your kafka cluster with the ruby kafka gem.

Test Script 1 - Try and Get the Topics

Kafka divides where your content goes into "topics" (think buckets). Here's how to get those topics back as an array:

Even if this fails due to a non existent topic, it should fail correctly (i.e. that the topic doesn't exist not that it can't connect to kafka).

This approach, from the ruby-kafka documentation, is supposed to be a higher performance approach.

Note: I haven't delved deeply enough into the docs yet to understand the real differences between #2 and #3 particularly in a streaming context.